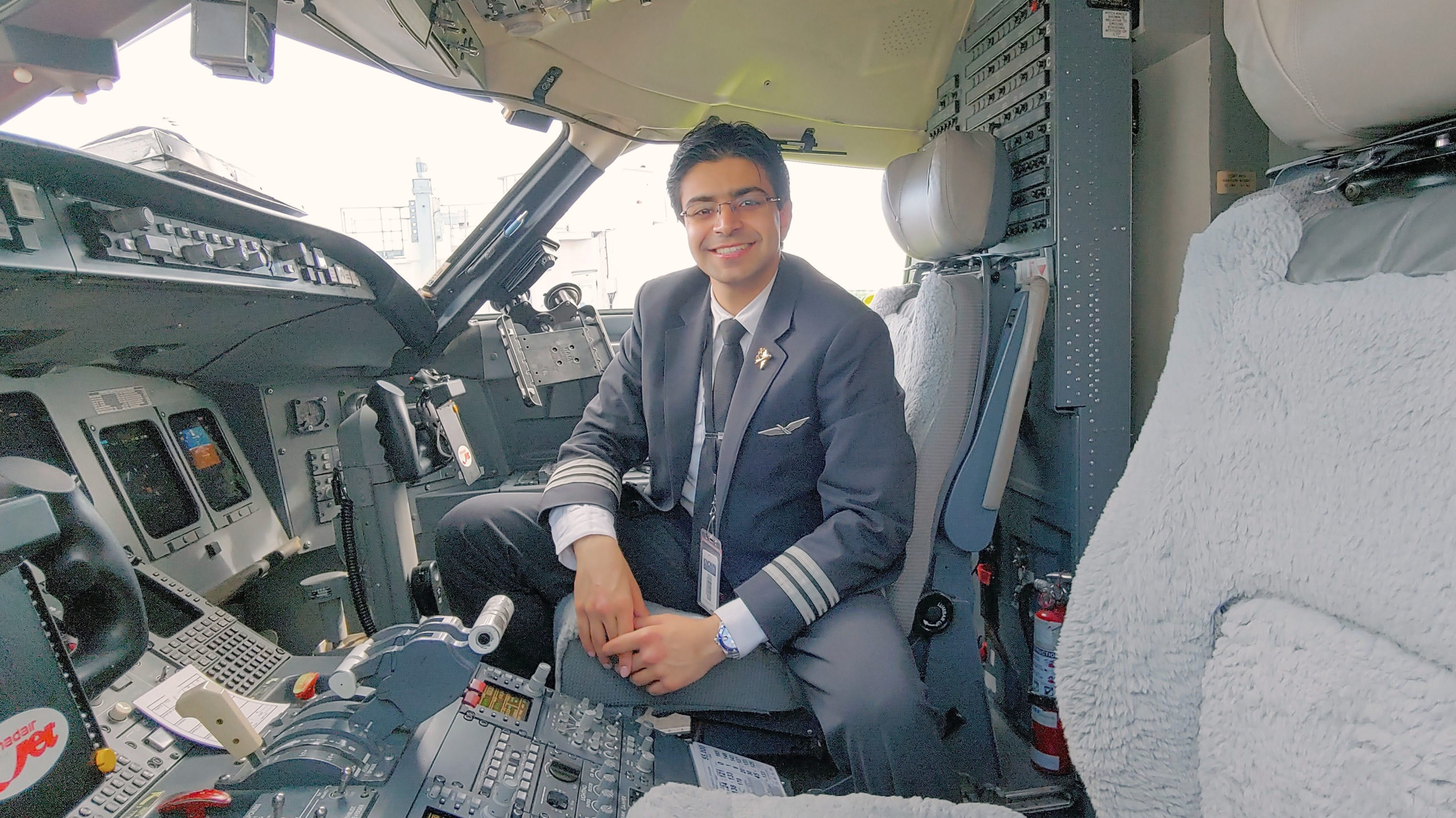 Meet airline pilot Muneeb “Moon” Mahmood. Moon is Pakistani-American and was born and raised in Massachusetts. Like so many in aviation, he barely remembers a time when he didn’t want to be a pilot. From running around his childhood home with model airplanes to the excitement he felt on his first trip to Pakistan on the 747, when it came time to choose a career, aviation was the most obvious choice. As a teenager Moon started taking flight lessons at nearby Westfield Barnes Regional Airport, but he quickly learned that even just getting his private license would take a lot of patience. At age 18, he failed his private pilot check-ride. He was frustrated and disappointed, but said “The failure taught me that failing is only a setback. It is an opportunity for you to learn, grow, and become even better at something.”

Moon didn’t give up after this first challenge, and even though there were multiple times during training that he wasn’t sure he could do it, he pressed on. He explained “training in the airlines is like drinking water out of a fire hose. So much information is thrown your way that it can really discourage you from moving forward. You’ve got to take a deep breath and remind yourself that you’ve made it this far and quitting is not an option. After going through the training process, it personally for me created a mindset and gave me a set of tools I can use in any aspect of my life to achieve anything I want!” He is very proud of himself for sticking it out, and following his dreams.

Now, Moon gets to enjoy the fruits of all his hard work. He talks with reverence about the feeling of flying, saying “Once the aircraft leaves the runway, the world beneath you becomes smaller, making you realize that the problems we have in our lives are merely nothing. They are as big as we think and make them.” When he isn’t flying or spending time with his family, Moon likes to film videos about aviation for other pilots and aspiring pilots. He talks about everything from what it is like to be a CFI, to how to deal with your parents not supporting your dreams of flying. He thinks that by sharing his personal life experiences he might be able to help inspire people to fly. You can check out his YouTube channel here!

Because of the hardships he overcame to be where he is now Moon’s pilot life is very important to him, and that includes his logbook. He is a big fan of using LogTen Pro because it saves him time but most importantly he pointed out, “If your paper logbook ever gets stolen or damaged, your hard work is gone in a blink of an eye.” Being able to create iCloud and dropbox backups with a single tap means he doesn’t have to worry about anything being lost.

It may sound like Moon is a very serious and determined guy, and he certainly is, but he’s got a funny streak too. He told me a story of a time when he stood with the flight attendants greeting passengers as they boarded the plane, and someone stepped on with a full box of pizza. “As they boarded,” he explained, “I greeted them in a kind and respectful manner, took the pizza box from the passenger and said, ‘Thank you very much for bringing pizza for us tonight!’ The passenger smiled, went with the flow and said, ‘You are very welcome,’ and kept walking to their seat. Everyone had a good laugh. Of course later we returned the pizza back to the passenger.”

Congrats Moon on creating a fantastic #LogTenLife! If you want to share your story, please reach out to us at raya@coradine.com